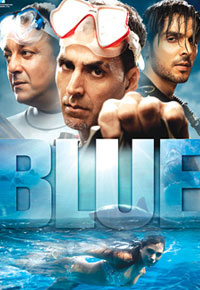 Blue is set in the breath taking sun soaked white sand beaches of Bahamas. Sagar (Sanjay Dutt) is an excellent deep sea diver who dreams of getting his own new boat someday while his friend Aarav (Akshay Kumar) is a rich arrogant businessman, whose ego is much larger than the big boats that he owns. The conflict between these two sparring friends is the conflict between the rich and the poor, between the moral and the immoral, between greed and honour...

Caught in between these two is Sagar's brother Sam (Zayed Khan) who has inadvertently managed to rankle a whole gang of mafia men. Now, these dangerous men are after him and Sagar is the only one who can help him. But to save his brother, Sagar has to wrestle with the ghost of his dead father... The only other person who is privy to Sagar's dilemma is Mona (Lara Dutta), his girlfriend. She is afraid that the secret that lies within the restless waters could destroy all their lives.

The adrenaline rush that comes with Blue accelerates as each new chapter unfolds. It begins with a bare handed skirmish with sharks, moves into deep sea diving, reveals the secret of a forbidden treasure and a buried past, flirts with death at the hands of the mafia and goes straight into the treacherous waters again.

A team of the best underwater technicians from around the world - divers, cameramen, and stunt directors are working on the making of Blue to make it as real and as palpable as the medium of cinema can allow, so that the viewer feels engulfed in the entire experience.