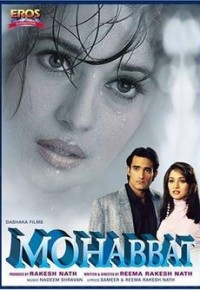 The wealthy Kapoor family consists of Madanlal, his wife Geeta, daughter Roshni, and son, Gaurav (Sanjay Kapoor). One day while Gaurav is returning home from a bank, he is attacked by a group of men led by Shiva (Shiva Rindani), but a young man named Rohit Malhotra (Akshaye Khanna) comes to his rescue. Gaurav hires Rohit in his firm, and both become fast and inseparable friends. Both unknowingly fall in love with the same woman, Shweta Sharma (Madhuri Dixit), but Gaurav finds out and decides to step away. Shweta and Rohit are in love and want to get married.

Then Shiva attacks Rohit and throws him off a cliff. Believing him to be dead, a shocked and devastated Shweta loses her voice. The Kapoors find out that Gaurav loves Shweta and they approach her brother, Shekhar (Farooq Sheikh), and arrange their marriage. They get engaged and Gaurav finds a lookalike of Rohit who is Tony Braganza. What Gaurav doesnÃ¢â‚¬â„¢t know is that if Tony is Rohit or not. Thus begins a merry go-round of love, emotions and sacrifice, all of which is Mohabbat
Read More