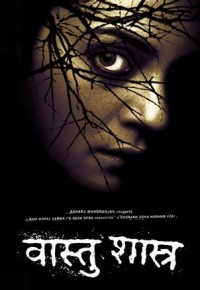 Life of a happily married couple is thrown into turbulence after they move into their new house. The spooky happenings inside the house escape the couple's notice at first, but their four-year-old son senses the ghostly presence.

The film has Sush playing Jhilmil, a general physician in a reputed hospital in Pune. She is married to Virag (Chakravarthy), who is a writer by profession. Together, the two with their four-year-old son Rohan (Ahsaas) make an ideal and happy family.

But then the family moves into a new house, Shanti Kutir, a palatial bungalow located on the outskirts of Pune. The place is ideal for Virag who is working on his new writing assignment. Little Rohan too finds the place ideal for enjoying his summer vacations.

A curious Rohan begins to explore the place and comes across mysterious happenings inside the house. When he speaks about these spooky elements to his parents, they think he is lying. But then something terrible happens and Jhilmil and Virag decide to take police's help. Police thinks that it is perhaps the act of some psychopath.

Jhilmil and Virag know they would now have to deal with the 'unknown' in their house by themselves only.
Read More