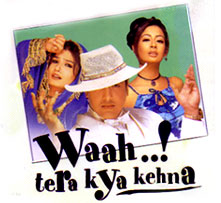 Krishna Oberoi (Shammi Kapoor) is a big industrialist and a grand old man at home. He is very fond of his grandson Raj Oberoi (Govinda), who due to an accident has been affected mentally and has taken on the behavioural patterns of a child. Krishna Oberoi has kept him in the care of Murari (Kadar Khan), who unfortunately is at the receiving end of a lot of pranks played by Raj; including jogging early in the morning on his behalf which has also been advised by the doctor treating him.

Krishna Oberoi has two other sons Dilip (Shakti Kapoor), and Ashish Rana Jung Bahadur), Dilip has a son Vicky (Monish Behl); always in an inebriated state. Dilip and Ashish are married to Anju (Navneet Nishan), and Madhu (Supriya Karnik), respectively. They all gang up to split up Krishna Oberoi's property among themselves, which otherwise would go to Raj.

Their scheme starts from sidelining Raj by sending him off to Simla, Murari's home town, and their logic behind this is that his presence would harm their social status and standing. So Raj goes off to Simla with Meena (Preeti Jhangiani), and soon after, the scheming relatives get rid of old Krishna Oberoi. Raj conveniently disappears in an avalanche in Simla and the entire property is taken over by the rest of the Oberoi family.

Just when it seems that the situation is beyond hope, Banne Khan (Govinda), a look alike of Raj and pretending to be Raj, makes an appearance with his nurse Salma (Raveena Tandon), and starts swindling the property and money. The schemers are outmanoevred and many questions arise in their suspicious minds...What happened to Raj Oberoi? Who is Banne Khan? Will he manage to get all the money and property?
Read More